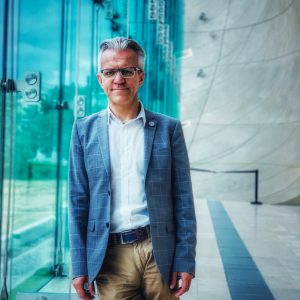 Professor Jarosław Płuciennik, Ph.D., born in 1966 in Ostrów Wielkopolski; he has been living in Lodz since the time of college; Professor of Humanities, since June 2009 full professor at the Department of Literary Theory at the Institute of Modern Culture of the University of Lodz; after 2020 a professor; former vice-rector of the University of Lodz for quality and educational programs in the years 2012-2016; Rector’s Plenipotentiary for open educational resources in the term 2016-2020; since spring 2020 a member of the advisory panel for the climatic-environmental policy of the University of Lodz; head of the Department of Literary Theory in the years 2014-2016. Between 1999 and 2006 he worked at the then Institute of Literary Theory, Theatre and Audiovisual Arts as an adjunct and later as an associate professor. Earlier, after finishing Polish Philology and inter-faculty individual studies in the anthropology of culture at the University of Lodz (1991), he was employed as an assistant (1991-1999). During internships abroad he also studied the Swedish language and Scandinavian culture and cognitive semantics (1994-1996). In 1999 he defended his Ph.D. dissertation entitled Retoryka wzniosłości w dziele literackim and in 2003 his habilitation colloquium on the basis of his work Literackie identyfikacje i oddźwięki. Poetyka a empatia. He is the author of over 150 publications in the field of cultural studies, literary studies, and cognitive science, including 8 authorial books written individually and many other coedited collective volumes. Moreover, he is the author of scientific translations from English and Swedish. His latest book works are Odwaga poetyki: Aktywizm, opór, psalmy (2019), Infinity in Language (together with Kenneth Holmqvist) (2008), Literatura, głupcze! Laboratoria nowoczesnej kultury literackiej (2009), and Literature, Culture, and Tolerance, ed. by A. Murphy, Ch. Russell, J. Płuciennik and I. Hübner (2009).